Showing posts from November, 2012
Show all

My Next Big Thing

I got tagged by my friend Thomas Pluck , writer extraordinaire and editor of Protectors ,  to participate in The Next Big Thing Blog Tour. So— 1.) What is the working title of your next book? Hoods, Hot Rods, and Hellcats. It’s an anthology of greaser-themed crime stories. 2.) Where did the idea come from? Moonshine to quench the Devil's thirst. Hearing Steve Earle’s "Copperhead Road" on the radio reminded me how much I always liked movies about running moonshine. Robert  Mitchum's  Thunder Road  is the  granddaddy of moonshine movies and one of my favorites.  Mitchum originally wanted Elvis to play his younger brother in the film, but the Colonel said no. That got me thinking about '50s B-movies and rockabilly music. The funny though? There's not a single moonshine running story in Hoods. 3.) What genre does your book fall under? Crime or noir—whichever name you prefer. Though, I’ll stick with calling it crime. I’ve come to dislik
Read more

- November 24, 2012
Over at Thomas Pluck’s blog, I belly up to the bar to talk about bullying, forgotten writers, American myth, and a host of upcoming projects. If you can spare a moment during the holidays, you should head over there and   give it a read.
Read more 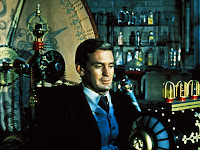 If you’ve read A Rip Through Time , Beat To A Pulp has a 900-word beaut from Garnett Elliott detailing Simon Rip’s encounter with the most famous time traveler of all: Read "Loose Ends"
Read more

For me, it was never a question of whether or not I wanted to be involved in Lost Children: The Protectors . Protects ’s fight is the fight. A single abused child is one child too many. Even the victims who escape the statistics (drug/alcohol abuse, incarceration, further victimization) can’t escape the scars. Abuse—whether mental, physical, or sexual—is not something a victim just gets over . I know this first hand. My wife’s mother and father have both been dead for over a decade now, and she’s still in therapy undergoing PTSD protocol due to their “parenting”. The only question I ever had was what to write. I began with an idea about a group of kids pulling off a complicated scheme to save an abused friend after all the adults failed to act. In my experience, adults turn their face from abuse for a litany of excuses: it’s not my business, it’s not my kid, who I am to tell someone how to raise their child, they’re just toughening them up, or I don’t want to make things
Read more
More posts