Showing posts from March, 2019
Show all

To Challenge The Warfare State 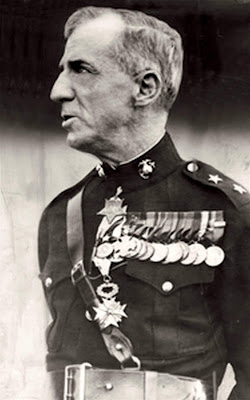 Smedley Butler fought in a whole host of military actions and wars. Most of them you’ve probably never of: Philippines, China, Haiti, Central America and the Caribbean during the Banana Wars, and France in World War I. When he retired from the US Marine Corps, he retired with the highest possible rank then awarded. At the time of his death, he was the most decorated Marine in history. To this day, he remains one of 19 men to receive the Medal of Honor twice, one of three to be awarded both the Marine Corps Brevet Medal and the Medal of Honor, and the only Marine to be awarded the Brevet Medal and two Medals of Honor, all for separate actions. His men called him Old Gimlet Eye after he contracted a tropical fever that left his eyes bloodshot while fighting in Honduras. His tattoo was legendary (an eagle, globe, and anchor piece that started at the bottom of his throat and ended at his waist). At the bequest of the mayor of Philadelphia, President Calvin Coolidge awarded Butler s
Read more
More posts