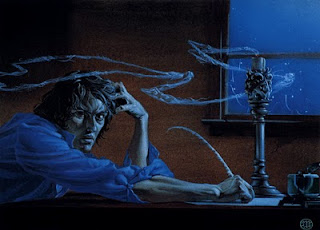 The main danger of blogging is the possibility of alienating others.

Years ago, there was a particular science fiction author I used to enjoy quite a bit. Then I discovered his blog. After getting a taste of his political and religious beliefs, I found the man so abhorent that I have never purchased or borrowed a single thing he has written since.

That's why I don't read biographies; generally, I want to continue liking the people I like.

Sometimes, though, it can happen when I don't think you're really considering the risk.

Case in point, earlier this week I was reading the newsletter of another author. Among the usual lists of appearances and publication dates, this author puts little bits of personal stuff. Most of the time, it's nice and makes the author seem a little more human and not so much like a thing or a product. This time he included a short movie review.

It happened to be for a movie I really enjoyed.

I don't think that everyone must like what I like. Constant agreement is not a factor on how I feel about you unless you can best be described as an argumentative prick. However, this particular author's critique was so off, so wrong, and so stupid that it was offensive to my intelligence.

It just pissed me off.

It lowered my opinion.

And it made the author seem like a cheap commodity.

It made me notice other little things; comments, opinions, and reoccuring themes that made me wonder about the author's political beliefs.

For a good fifteen minutes, I actively disliked this person.

But the guy wasn't setting out to offend anyone. He wasn't trying to force anything he thought on the big things down my throat. And I think he had no idea that anything in there could possibly irritate anyone.

But what's interesting to me is that the science fiction author had to know. He had to know if he talked about his feelings about god/God and politics that he was going to irrevocably piss some people off. Especially since that seemed to be all he ever talked about on his blog.

Maybe he's just that out of touch? Maybe he thinks he has enough readers that he can afford to lose more than a few? Or maybe he doesn't give a fuck?

Maybe to a degree that's a good thing? Though, it's still not much of an excuse for being an outright fucker.

Thankfully, I don't have to worry about that for a while. But it's a thought I don't find very comforting when all I really want to do is write.