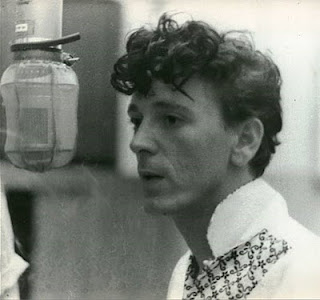 Vincent Eugene Craddock originally considered a military career. In 1952, he enlisted in the Navy. Three years later, he used his reenlistment bonus to buy a new Triumph. During July of that year, he suffered a horrible motorcycle accident that shattered his leg. He refused to let the doctors remove it. The rest of his days would be spent with both a limp and severe chronic pain.

This was the start of the bad luck that would follow him even after he reinvented himself as Gene Vincent.

A year after his accident, Gene wrote "Be-Bop-A-Lula", a pleading rock hit (hailed by Rolling Stone as one of the 500 greatest rock songs ever) that secured him and his Blue Caps a recording contract with Capital. Despite this massive hit, and becoming one of the first rock stars to act in a film, The Girl Can’t Help It, lasting commercial success, like it did for most of the rockabilly pioneers, evaded Gene.

A tax dispute with US authorities sent Vincent packing off to Europe. In a typical twist of fate, he found a much wider fame and a broader audience. But his bad luck would return.

In 1959, he was involved in a car accident. Vincent broke his collar bone and re-shattered his leg. After being thrown from the taxi, his friend Eddie Cochran suffered massive brain trauma and died the next day.

Vincent spent the rest of his days trying to duplicate the modicum of success he found before. But continued health trouble and more legal disputes kept fame at far more than arm-length.

It’s no surprise that Vincent died in 1971 from a ruptured ulcer.

Vincent is proof that talent and fame don’t necessarily go hand in hand. If the only song of his you’ve ever heard is "Be-Bop-A-Lula", you’re missing out. A performance of "Woman Love" supposed got him arrested for indecency. I keep waiting for someone like Tarrantino to use "Race With The Devil" in a film and give it the fame it deserves. "Lotta Lovin’" is a brilliant earworm with infectious handclapping and a catchy chorus. "Say Mama" sums up teenage desires better than any other rock song ever written. And the fact that no one remembers "Pistol Packing Mama", written with Eddie Cochran, is one of the great tragedies of music.