The Sunset Blonde At The Salton Sea

The Sunset Blonde At The Salton Sea
by
Chad Eagleton 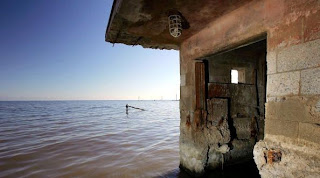 She's a neo-noir waiting to happen...driving down lonely two-lane highway, a trunk full of insurance money, and a pawnshop .38 under the seat, Miles Davis on the radio and she keeps kicking the half-empty bottle of Jim Beam with her boot heel as you steer toward The Salton Sea, where she made you promise to take her because the night before her brother died, the two of them watched The Monster That Challenged The World on late night TV and it was only a month ago she made you buy that Val Kilmer movie at the video store even though you thought 10 bucks was a little much for a used DVD. She’s been talking about it ever since like her brother will be there waiting for her, all that salt and water keeping his spirit earthbound like a magician’s circle…

Driving in her burnt-orange, 1968 Plymouth Roadrunner, the car she inherited from her brother, smoking Pall Malls, the only cigarettes you can smoke in the car because they were her brother’s brand, and the floorboards still smell a little of vomit from that friend of hers who always has a bottle of gin and gives away open-mouthed, drunk kisses; driving there because you promised and Southern California is still in the direction of Mexico and there's that ex somewhere back North, Portland last you heard, and you know he's out there driving that lime-green Dodge Dart and he knows and he's the type of guy who'll make you hurt real bad; you heard he killed a man in high school but his uncle happened to be the sheriff, so you’re a little scared but now you can see the sign that says Welcome to West Shores of The Salton Sea and she’ll want to drive from here and she does...

Walking the beach, soundtracked by the slow slap of water against rotting timber, when she looks out toward the salt flats and the brilliant whiteness blinds her and she looks away quickly, grimacing, and you put your arms around her as she says, “I saw him.”

And you know she means her brother, that she saw him in the brightness, that small span of time before your eyelids slam shut to save your retinas from burning, that brief instant when you see things that aren’t there. But her hair smells like green apples and her lips taste like cigarettes and strawberry Hubba-Bubba and you pull her down to the sand and her perfume is all salt and sea and she mutters “The Lovesong of J. Alfred Prufrock” by TS Elliot in your ear...
That’s what he never told you that night at the bar.

But that’s okay because you never told him—

You already owned a gun, and knew all about her brother, and she’s never liked Val Kilmer except when he played Doc Holliday, because dying is sexy, and you’d already given her a copy of Linkin Park’s Minutes To Midnight anyway. You never told him you’d already been there to the Salton Sea or about the body the two of you dumped in the alkali flats on the south shore and the way the sand and salt looked on his eyeballs as you buried him or how the tide had started to come in and you’d been afraid he’d get washed out, carried away into the sea where he’d bob and rot and fester like a memory.

You certainly never told him about afterward.

How right before you kissed her, she’d said “I should have been a pair of ragged claws scuttling across the floor of silent seas” and then, in the abandoned bait shop that was slowly sinking into the sea with the patient, inevitability of a drunkard’s death, you’d laid her down on the long, grey coat your mother gave you and her hair had smelled like green apples and her lips had tasted like cigarettes and strawberry Hubba-Bubba, but she hadn’t muttered anymore of “The Lovesong of J Alfred Prufrock” by TS Elliot in your ear.

Or maybe she had?

Maybe you just didn’t hear it as the setting sun spilled through the ruined walls, thick and white with salt, rushing over her hair and you’d noticed for the first time that it was the color of sunset and the sound of the boards, creaking with every thrust into her, grew and rumbled like the surf until you felt it thundering in your ear and it didn’t stop until she came.

You laid there with your head on her chest and you noticed the flecks of blood on her hand and you wondered if it was from you or the body you left on the other side of the beach. But none of that mattered, because then you knew that you would do anything for her, your Sunset Blonde at the Salton Sea.

So, you told him to watch his mouth.

Originally published at The Pulp Pusher