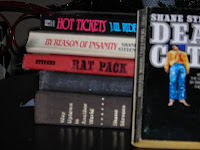 One of the things I discuss in my piece on Shane Stevens is whether or not the name is a pseudonym. Several things seem to have contributed to this idea. First, there is the lack of information on Stevens. He seems to have rarely spoken about himself and went out of his way not to reveal anything.  This lack of info is complicated by the fact the existing info is full of what appears to be "inconsistencies." And finally, there's the matter of him virtually disappearing.

I know what I believe about Shane Stevens and I think by the time you read my lengthy essay, you'll agree.

But what about now? If you're familiar with Stevens, what do you think?