In 1989, I read Stephen Kings' The Dark Half. King borrowed the name Alexis Machine from Shane Stevens' Dead City. In his afterward, King heaps an enormous amount of praise on Stevens' work. Thanks to King--I had to find and read those books.

It wasn't easy. Despite King's homage and kind words earning several of his novels a reprint, Stevens work has been notorious hard to find. Any personal information on Stevens, the man, is non-existent and never more indepth than his meagre biography on Wikipedia. He appears to have spent his life walking, namelessly and silently, purposefully in the shadows. After the publication of his last novel, The Anvil Chorus, Stevens vanished.

Today, he's nothing but a ghost.

I owe a number of writer's thanks. They've influenced me in a variety of ways, not just stylistically or themetically. But very few have affected me the way Shane Stevens has. His books, while brutal and savage, dark and despairing, burst with the tragic beauty of humanity. When I got serious about my own writing, his were some of the novels I studied, pouring through the text for the nuts and bolts of this writing thing, hoping to come just a little bit closer to being able to do this myself and my way.

I understand Stevens the writer well.

Until this past year: I've been working on a long, non-fiction piece, chasing Stevens' ghost all the way uptown in another world.

Now, I'm almost finished with this piece and only awaiting a couple more pieces of information. Every Saturday, until the piece sees publication, I'll put a little piece of...something up here. 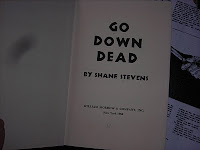 Adjacent is the title page for Steven's first novel, Go Down Dead. Purchased in 1963, it would not see publication until 3 years later.