- February 18, 2011
This past Saturday, one of our favorite local bands performed at The Player’s Pub. I’ve dug the
Swingrays and their rockabilly sound for years. The guys have tremendous stage presence, know how to get a crowd energized and play a nice mixture of original material and covers. Long before Maria and I were ever married we spent many a Monday at The Bluebird during Cigartini Night.

Maria has always taken going out seriously, especially when weather and other circumstances prevent her from going anywhere other than the grocery store for almost two weeks. Preparing to go out is a ritualized process that takes a good deal of time and preparation. Saturday, while she was getting ready, we streamed the John Waters’ film, Cry-Baby.

Cry-Baby is Waters’ spoof of 50s era teenage rocksploitation flicks. Johnny Depp plays Wade “Cry-Baby” Walker, a bad boy greaser (called Drapes in the film) who’s been raised by his aunt and uncle after both his parents were sent to the electric chair. One day at school, Walker falls for Alison Vernon-Williams, a cute Square girl. Somehow Walker convinces Alison’s grandmother to let Alison accompany him back to Turkey Point. This enrages Alison’s boyfriend, Baldwin. He descends on the Drape’s hangout spot with a gang of Squares. A massive brawl ensues that, of course, ends up sending Walker to prison.

Further complications keep our couple apart before everyone sings their way to a happy ending. A jealous Drape girl pretends she’s having a Walker’s baby. Alison goes back to Baldwin before realizing how much she loves Cry-baby. There’s a jailbreak and a dangerous game of chicken with Walker and Baldwin rooftop riding on hotrods.

I’ve never particularly cared for musicals. Something about breaking into song at random intervals has always bugged me. It ruins any sense of immersion I have in the narrative. And yes, I know that’s the point. Musicals operate in a reality where singing is the norm and the songs are as integral to the narrative as the dialogue. I know that; it just doesn’t work for me.

But I don’t mind it in Cry-Baby for some reason. Maybe it’s because of the types of songs. I’ve always liked rockabilly. To me it’s the epitome of cool and one of the few things my father and I have in common. Though, I suppose it could be the comedic aspects. I’m more than familiar with the type of films Waters’ is spoofing and know that I’m not expected to accept the musical world of Drapes vs. Squares with any sort of conviction.

There is one thing that I’ve never understood about the film. Sure, I know girls like bad boys and you can't help who you love. But why does Cry-Baby Walker fall for Alison Vernon Williams when he could easily date fellow Drape gangmember, Wanda Woodward? 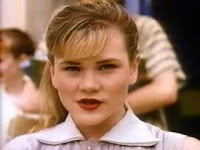 I mean sure, Alison Vernon-Williams is cute and all. Who doesn't like ponytails and bobby socks. 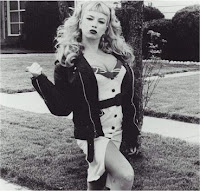 But I mean, come on now. Wouldn't you choose Wanda Woodward over a poodle skirt? Is just me? Is it?