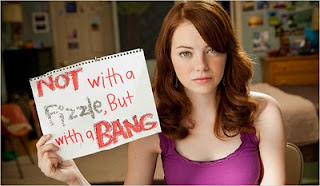 Easy A opens with Olive Penderghast using a fake date with a fake boy to get out of a weekend camping trip with her best friend, Rhiannon, and her weird, hippie, nudist parents. When they return to school, Rhi presses Olive to dish the details. Olive gets carried away with her lie and tells Rhi that she lost her virginity—but it’s not that big of a deal since she doesn’t even plan on seeing the boy again. Unfortunately, all this is overhead by Marianne, the school’s Evangelical zealot and moralizing fascist. The story goes viral and Olive is suddenly the school skank.

Several days later, during a discussion of The Scarlet Letter, one of the Christian girls makes a rude comment in class. Olive’s comeback gets her sent to the principal’s office. During her labor intensive detention she admits to the gay and constantly bullied Brandon that she made the whole thing up.

Olive’s confession gives Brandon an idea that sets up the rest of movie. He’s tired of getting bullied. If Olive will pretend to sleep with him then maybe everyone will leave him alone. She agrees and concocts a hilarious scheme they execute perfectly at a popular girl’s house party.

The other kids stop bullying Brandon and start paying Olive attention. For all her intelligence and self-assurance, Olive has never had this much notice before. Not wanting it to end, she starts dressing sexier and wearing a large A on her chest. 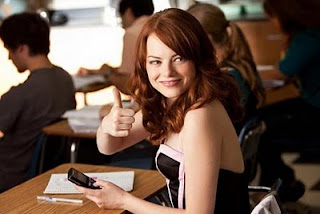 Meanwhile, the actual truth of the party sexcapades spreads through the nerd-vine. Soon, every geek, dweeb and high school untouchable beats a path to Olive’s door. They want the Brandon treament and they'll pay for it.

Olive agrees and that's when everything starts to get out of hand...

Easy A was all surprises for me. First and foremost, the film actually has a plot, a plot with acts, a plot with structure, a plot with all those things a plot is supposed to have. And for once, it's not the lazy go-to plot former Saturday Night Live members have beat into the ground and use to frame a series of random and unconnected sketches about the same character—save, stop, finish, win at/for X before X is sold, closed down, moves away, remarries.

It's a genuinely funny film. It relies on dialogue and situational  humor without resorting to the crass dick/fart/gross-out idiocy that's dominated comedy for years. There's none of those awkward moments where a bit goes on and on even though it stopped being funny 5 minutes ago and the director should have trimmed it during editing but is too much of a pussy to say anything to Will Ferrell/Mike Myers/Adam Sandler. For once, it was nice to watch something that wasn't nonsensical, farcical or absurdist. Something that didn't reek of the college level aren't-I-so-smart humor of Adult Swim's "original programming" that mostly makes me want to change the channel. You know, I mean those sort of truly unfunny things that Sarah Silverman has based her career around while convinced herself she's actually humorous and that men don't just go to see her just because she's kinda cute and when do cute girls say random things like, "poop" anyway? 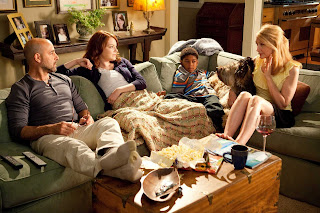 Screenwriter Bert V. Royal wrote a film that's modern and timely on one hand, but steeped in the films that I loved as a teenager—Ferris Bueller's Day Off, Can't Buy Me Love, Say Anything, and John Hughes' entire body of work.

The cast is exceptinal. Stanley Tucci and Patricia Clarkson shine. The two of them have maybe 10 minutes of screentime, but are unforgettable as Olive's parents. Even in smaller parts Thomas Hayden Church continues to bury Lowell Mather with solid acting. For once I almost forgot that Lisa Kudrow was on Friends. Malcolm McDowell continues to chew scenery and sleep his way through menace-by-rote, but it's all perfect for a school principal. And, finally, Emma Stone is a dream as Olive. For someone her age, she's incredibly comfortable with both the comedic and the dramatic. She has a wonderful husky voice and exudes an appealing combination of understated cool and overstated dork.

Easy A isn't a perfect film. For all it's honesty and it's modernity, it stops just sort of satisfyingly confronting some of the big topics it raises: the hypocrisy of religion, the sheer cruelty of high school, our society's twisted issues with sex. Most of all, and this is where it actually disappoints, it pussies out on examining why a smart and self-assured girl would feel so desperate for attention that she'd willingly pretend to be a whore.

But Easy A is the best comedy I've seen in a long time.