Shane Stevens Saturday: In the City 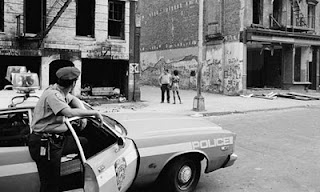 Shane Stevens' novels were all published from the mid 60s through the late 80s (the J.W. Rider books). In my piece on Stevens I quote a good deal from his letters. Much like with the opening dedication of his second novel, Way Uptown in Another World, Stevens speaks a lot about the violence happened all around him. This obviously had an affect on his work, on his opinions of the world, and his own behavior. It's easy to dismiss all of those words as just being posturing or exaggeration or, worst of all, just a reference to his time in Harlem.

For those of us from my generation, it's difficult, I think, to put the time that Stevens was writing into perspective. I know I wasn't alive then. However, I think it's important to be aware of what was going and it's something I didn't really have the space to go into with as much detail as I would have liked in my piece.

The Vietnam War was underway, giving birth to the radical actions of The Weathermen. City streets flooded with flower children looking for meaning beyond their own suburban lives. The inner cities saw an explosion of drug use, first heroin and then, as we moved into the 80s, crack cocaine. The Civil Rights movement fanned the flames of already strained racial tensions; not only from the more passive resistance of Dr. King and his followers but the leftist and militant factions that made up The Black Panthers and The Black Liberation Army (most famous for their Brinks Robbery and the shootout with State Troopers on the New Jersey Turnpike).  The Son of Sam stalked lover's lanes. The corrupt actions of police officers led to the Supreme Court's Miranda Rights decision while the Knapp Commission investigation sent shock waves through the NYPD.

Right in the middle of it all, lived Shane Stevens.

For a greater understanding of Shane Stevens' New York and what was going on, you might check out The Savage City, the most recent book from the always excellent T.J. English