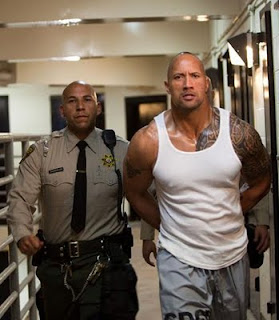 A botched bank job gets his brother killed and the Driver thrown into prison. For the last ten years he's planned his revenge. On the day of his release, he foots it to a junkyard where a car and a gun are waiting for him. He hits the road in fifth gear, ready to make the crew that murdered his brother pay in blood.

Two men follow. One a junkie cop hoping to fumble his way through the case and into retirement. The other an unbalanced hit man with his therapist on speed dial. They chase the trail of bodies and burnt rubber as the Driver unravels the mystery of who set him up.

Faster is almost a perfect piece of hardboiled noir. It's beautifully paced. Plot constantly moving forward. Revealing bits of backstory and new clues to the doublecross with no wasted movement or dialogue. The film strikes a very nice balance between gritty realism and Hollywood escapism with very little of the over-the-top frills most audiences have come to expect. 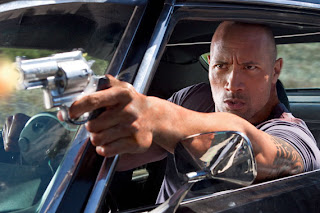 The cast is good. Carla Gugino makes the most of a lightweight role. I didn't recognize Moon Bloodgood as Billy Bob's ex-wife. Thornton is perfect as the burned out Cop giving it one last shot. But the real standout is Dwayne "The Rock" Johnson. He dominates the screen from that first opening shot of Driver pacing in his cell like a caged animal ready to explode with vicious violence. Johnson moves through the film without just relying on his imposing, physical presence. He invests Driver with a sense of sadness and regret, while at the same time conjuring this incredible aura of unstoppable force.

The problem is that the last third of the movie just  fizzles. It's like the writers give up. Instead of remaining true to the story, they force an ending of awkward expositions and unfulfilling resolutions--all to hammer home a half-assed theme of redemption that I don't think the rest of the movie supports.

Faster is a film worth watching even with the chump ending. Two-thirds of the movie is brilliant. When The Rock made his transition from the squared circle to the big screen, that two-thirds is what I thought I could look forward to. Instead I got films like The Tooth Fairy. I hope this movie will be a turning point in his career.