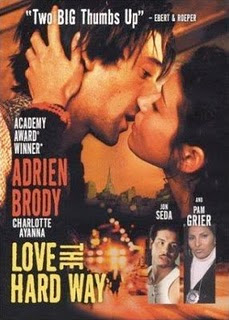 Since my wife is such a big fan, we streamed an Adrien Brody movie neither one of us had ever seen. Love The Hard Way is a little-known indie that sat on the shelf for a couple years until Brody won his Oscar.

We almost didn’t make it very far. We’ve never had a complaint about anything we’ve watched through Netflix until this film. The audio was fucking awful. A far-off whisper until I cranked the volume up to about 50.

But we persevered. After Hollywoodland, Adrien Brody in a crime drama was enough for both of us to see it through.

In the film, Brody plays Jack, a chain-smoking hustler who secretly wants to be a writer. Jack and his roommate, Charlie, run an illegal betting operation for college students, but score real cash with the help of two “actresses” and a front desk man who looks like a reject from a Bauhaus video. As a group, they run a badger game scheme out of a fancy hotel downtown. The two roommates dress as cops to blackmail businessmen before the "actresses" actually have to put out.

Charlotte Ayanna plays Claire, a pretty young college student from a small town in Maine. She’s a smart girl who's studying to be a scientist. She meets Jack at her part-time job and then, later, on campus when he’s collecting vig from her boyfriend's buddy. Jack convinces her to meet him at the Staten Island Ferry.

She does. They hit a nice restaurant. He flirts. She flirts back and falls for him even though Jack warns her. He’s bad, you see. He only likes things that give him kicks. He’ll just hurt her… 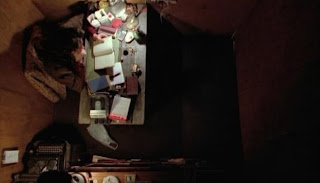 Now, up to this point, I’m digging the movie even if it’s a little rough. Some groan bits of dialogue. Overly staged blocking. Self-consciously arty shots now and again. But in spite of that, there are some flashes of brilliance.

Mostly, the power comes from the two leads. Sure, Brody’s character comes off more as a smug, young prick rather than a weary, streetwise hood but it works. Along with his secret room in a storage unit, it helps contribute to the idea that maybe there is something real underneath the pleather snakeskin jacket. Brody has enough charisma to power through some of the awful bits of dialogue. He manages menace fairly well. And, honestly, I don't think there's an actor around who can emote anguish and sorrow the way he can. As my wife says, no one cries on screen like Brody.

Charlotte Ayanna is just painfully pretty and fresh-faced and unconsciously sexy. Next to Brody’s tall, thin frame, she looks tiny. She manages to convey innocence beautifully with an almost purposeful naivete. Together, her and Brody have some amazing chemistry. Their moments of intimacy manage to be both touching and sexy without feeling vulgar.

Wonderful things can be done with very simple plots, with very familiar plots. It’s easy to forget that. I know, as a writer, for a long time I thought "stunning" and "memorable" required complexity. Intricacies upon intricacies. It doesn't. The things which carry punch are the simple things. The things like love and hate and regret and sorrow and betrayal. The things we all know. Everything else is just window-dressing.

Besides, believe it or not, I’m a fucking sucker for a love story. For a boy meets girl story. I wanted to know what happened. How did this version play out? I knew pain was coming. I was prepared for it. I knew Jack and Claire wouldn’t have an easy time.

The sad thing is? When it came? That's when the film lost me… 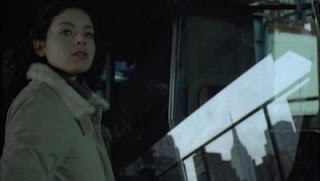 So, Claire returns early from a trip to another university and catches Jack in bed with one of the badger game girls. Claire has a breakdown. Jack tells her not to cry, that he “doesn’t deserve tears.”

She leaves. Wanders the streets. Gets mistaken for a prostitute by a man on the street. So, what does she do? She lets him fuck her—bareback—for $50 bucks.

Then she goes and sees the Bauhaus clerk. Asks for a place to stay and tells him she wants in on the badger game scam. Of course, the next scene is Jack and Charlie in their cop uniforms busting into a new motel room only to find Claire riding some fat, old dude.

But it doesn't end there. It keeps spiraling straight down the gutter. Character inconsistencies. Contrived plot points. Forced actions. Confusing behavior. And just all around nastiness until it careens to a ridiculous, bullshit, pseudo-intellectual ending full of ridiculous dialogue and exposition.