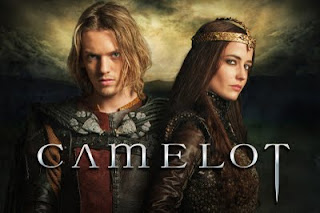 Netflix just added Camelot, one of Starz's new programs. Currently, we get Starz (it was given to us by our satellite provider as a thank you), but I always seemed to miss it when it was airing week to week. Honestly, I think I prefer watching programs this way, having it all in front of me and being able to watch as much or as little as I want at my leisure.

So far, three episodes in, it's okay. A couple of things are really keeping the show from being better. First, it's obvious they've retooled their retelling of King Arthur to feel more like A Game of Thrones with a dead king, several warring factions, and political and personal machinations. Most of the sets and the locations shoots are quite good and believable, but every now and then there is a set that just looks incredibly fake. The worst offense, however, is the casting of King Arthur. It's the thing I'm not sure I'm going to be able to get past. It's not that I think Arthur should look like Conan the Barbarian, but the actor in Camelot looks like a CK One model, one of those scrawny, androgynous man-boys. It's difficult to believe him as the future King and a fearsome warrior. It's especially difficult in the second episode when he gets Excalibur, called the Sword of Mars in the show. The sword looks to be a hand-and-a-half or a bastard. The thought of the man-boy model wielding it is just laughable.

It's a shame because there are some nice things about the show. The rest of the cast is fairly decent. It's nice to see Claire Forlani in something again, Vera Green isn't bad as Morgan (even though I've never found her attractive--not even in Casino Royale) though she does have a tendency to chew scenery just a little less than Jeremy Irons in the Dungeons & Dragons film, Joseph Fiennes is great as Merlin, and there's an arc with James Purefoy. Their version of the legends actually has magic in it, something that's been lacking from a lot of recent re-tellings. And they've been running with the implication that there's actually nothing special, nothing mystically foretold about Arthur, that it's all just a manipulation of the collective unconscious by Merlin to provide the people with the king he believes they should have.

I'm willing to give it a chance based on it's strengths, even though I worry I'll never be able to get past the casting of Arthur. Starz programs do seem to take several episodes before they find their stride--I know Spartacus did for me. The only show I've watched of theirs that has started out strong from the beginning is the joint BBC production of Torchwood: Miracle Day.