- August 10, 2011
I’ve been re-reading a bunch of The Destroyer books to get in the correct headspace for something I’ve been working on.
The Destroyer books, in case you’re not familiar with them, was an action adventure series that ran for a number of years and authors. The main character is a man named Remo Williams. He’s a NYC cop when he’s forcibly recruited into CURE, a secret organization that answers only to the president. You see, Remo grew up an orphan and as an adult he still has no family of his own, so he's the perfect target. CURE fakes his death and hands the unwilling Williams over to Chiun, the Master of Sinanju (the source of all martial arts; the art of which all others are but shadows), to be trained as their newest weapon—The Destroyer.

During the course of the series, Remo and Chiun travel the globe and fight evil geniuses, maniacal warlords, masters of mind control and other deadly assassins. The books have tons of action, some sex, and a good bit of comedy (mostly from Chiun). 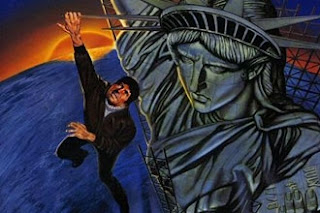 The series was adapted into a fun but terrible film starring Fred Ward as Remo and (yes, this is as offensive as it sounds) non-Asian Joel Grey as Master Chiun. After the Hollywood flop, they gave it a go as a pilot for a television series. I thought that pilot was a little better. At least they bothered to hire a real martial artist for Remo (Jeffrey Meeks). However, they insisted on keeping up the disgusting "yellow face" by casting Roddy McDowell as Chiun. I haven’t checked, but I would be surprised if you couldn’t stream one or both on Netflix.

I remembered loving the books as a kid. I thought they would be the perfect to gear switch my brain. Besides, I remembered them being a whole lot of fun.

And they still are…just not quite as much.

The first thing I noticed was what a lot of people refer to as the books' "politcal uncorrectness". I'd go a little further and say that there's a political bent and a general societal opinion that differs a lot from my own. That's been a little of a turnoff for me, but I've been able to live with it through a couple books by keeping in mind when these were written and maintaining the mental distance I'll use when reading something like Sax Rohmer's Fu Manchu or one of H.P. Lovecraft's rascist rants in the middle of an otherwise excellent weird tale.

However, the main thing that's bugged me? The thing that's really kept me from enjoying the books? A lot of the martial arts scenes?


I read the first Destroyer book back in 1985 when I was nine years old. I didn’t know much about martial arts then.

Now, I have black belts in Taekwondo and Hapkido. I studied Wing Chun in Germany. I practiced 9 Animal Style Kung-fu and Shaolin-do in college. I even tried my hand at Capoeria. In addition, I’ve watched a hell of a lot of martial arts movies (not just Hong Kong films, but movies from Japan, Korea, Thailand, and India), quite a bit of boxing, and a lot of MMA matches.

I know a little bit about martial arts now.

And I even understand that the two hardest things to write are:
Like pretty much everything in fiction, sex and violence should feel real, but be better than actual reality. Doing either one well enough that it’s exciting and engaging, rather than just silly, overly technical or unappealing vulgar takes real talent. 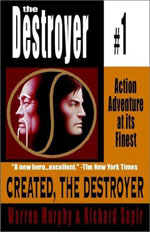 I understand what I’m reading when I pick up a book like The Destroyer. I really do. I’ve always believed there is an unspoken agreement between writer and reader. Certain things you agree to accept as reality as long as there’s still a consistency maintained within the fictional world itself. So, I have no problem with something like, “Master Han focused his chi and then punctured the steel door with two fingers.” Or even the occasional, “The Black Ninja moved through the horde of goons like a silent whirlwind of death.”

Because those are things that can happen within that particular fictional world.

Yet, a couple of things struck me re-reading The Destroyer books and have really been a letdown:

1.) I have absolutely no idea how Sinanju looks, stylistically.


Yes, I understand it’s supposed to be the origin of all martial arts. So, it may be indescribable in typical terms like hard or soft, internal or external. But, as the origin of all martial arts, shouldn’t that make Sinanju descriptions easy for any writer? You don’t have to learn about every martial art completely. You can describe a karate style kick, some wing chun style trapping maneuver, an aikido throw, and a jujitsu joint lock.

2.) At least in the early books I own, Murphy and Sapir apparently never bothered to learn anything about the martial arts or were just writing these books too quick to care.


A lot of fight scenes are blown through quickly. Chiun or Remo dispatches a goon in a single sentence. Or we’re treated to some just plain silly nonsense like the judo chop to the neck. (I’m serious--A “judo chop”). Or worst still are the fight descriptions that make no sense when you attempt to visualize it in your mind.

Re-reading them has been a reminder that some things should just be left to memory. Re-discovery often brings disappointment.