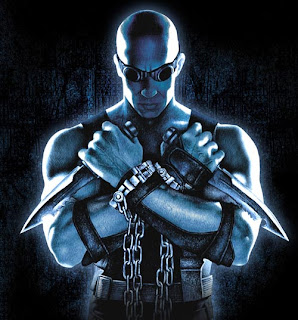 A transport ship crashes on a distant planet after being struck by debris from a comet’s tail. Most of the people onboard die. Only one crewman survives, a woman named Carolyn Fry who panics during the landing and almost kills everyone. A few passengers crawl out of the wreckage: a runaway, a holy man and his charges, an antiquities dealer, and two settlers.

Then there’s the bounty hunter. A man named Johns, a merc with a drug habit he feeds by shooting spikes of morphine into his eyeballs.

Most of the cargo is destroyed. However, the most important cargo? The most valuable and dangerous piece is missing.

Riddick is Johns’ prisoner. He’s an escaped convict, a murderer with a large bounty on his head. Johns tells the survivors that Riddick is a human predator who can see in the dark and he’s capable of anything. Like skull-fucking you in your sleep.

Luckily, Johns recaptures Riddick before anyone needs a nap.

While Johns is tracking Riddick, the others survey the ship and realize it’s mostly beyond salvaging. They know then that if anyone is going to get off this desolate planet, they need to find some outpost of civilization. For that, they all need to work together.

All of them—even Riddick.

After trekking across the barren landscape and through a massive bone-yard of some now extinct species, the group finds a geological research outpost abandoned to the harsh glare of the planet’s three suns. There’s water there and even a ship. The ship is in good shape. It’s missing fuel cells, but those can be taken from their own transport. It seems like a boon, a godsend.

But still, there are no people. None.

The group investigates further and makes a chilling discovery: there’s a life-form living below ground, at home in the dark and hungry for human flesh.

It seems simple enough to avoid them on a planet with three suns. Too bad there’s a solar eclipse coming....

Last night we watched Pitch Black again. I hadn’t seen the film in a long time and had forgotten how much I loved it. It’s such a great movie--a gritty sci-fi flick, a cool horror-thriller with elements of crime fiction and it does everything so well. 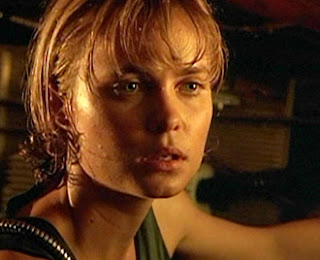 It establishes a dark mood and feel in frame one with Vin Diesel’s opening voice-over, “They say most of your brain shuts down in cryosleep. All but the primitive side... the animal side. No wonder I'm still awake.” It’s shot beautifully and simply with different light filters and uses only a minimum of computer effects. The cast is great with Vin Diesel, Cole Hauser, Radha Mitchell, the lovely Claudia Black, and Keith David. There are nonstop bits of quotable dialogue and it’s incredibly tense and suspenseful and scary without going the cheap buckets of gore route.

It’s a shame the sequel is so awful.

I remember being excited when I first heard they were making a sequel to Pitch Black. The world created in the first film is a dark and dirty future of cramped, poorly lit ships and massive dark prisons. It’s a Blade Runner future, an Alien future, an Escape From New York future. A human-centric universe with all those human centric problems that people want desperately to escape from, signing up to be settlers on distant and hardscrabble worlds but none of them have money so they travel the lonely ghostlanes.

Riddick is a character from crime fiction. He’s a very human monster. Abandoned at birth and tossed in a dumpster, you know he grew up hard and growing up hard removed him from any connection to the human race. He exists apart and not among.

“And then you get sent to a prison where they tell you you'll never see daylight again. So you dig up a doctor, pay him twenty menthol Kools to do a surgical shine job on your eyes …”

Johns: Doctors decide who lives and dies on the battlefield. It's called Triage.
Riddick: Kept calling it murder when I did it. 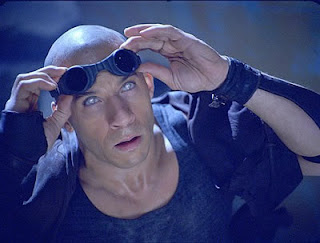 You see, Jack is a runaway. A girl pretending to be a boy. (I think you can read between the lines here and see Jack's life, can't you?). And only Riddick knows it straight off. This creates a connection--Riddick sees himself. Sees another abandoned one.

But that doesn’t automatically bring a full, human connection. Near the end of the film Riddick is fully prepared to abandon the survivors to the planet of monsters. It’s only when Fry says she’ll die for them that he agrees to go back and help.

Riddick goes back not because his heart grew three sizes that day, but because he’s intrigued. He’s never seen this before. What he’s experienced of humanity is not this.  It’s not selfless. It’s not caring. It’s not love. It’s just you and your own survival.

He wants to know, I think, how this is going to play out.

I dug the film and I had these visions of what the sequel would be like. I do that with things that speak to me, with things I like. I imagine being a part of this created world and what I would do with it, how I would contribute...

Their ship lands in some planet-wide megaopolis. A massive, futuristic urban hell. Riddick abandons the girl named Jack, leaving her in the care of hoodoo holy man. He thinks that maybe this way, she won’t have to become like him.

Jump forward a few years. Riddick lives in the alleways and the tunnels and trash-strewn streets lit with neon and slick with blood. The girl Jack comes to find him. She needs his help. He agrees, because he’s intrigued. Maybe she helps save his life from some bounty hunters and he goes with her because he owes her a debt?

Jack takes him to a group of other cast-offs, a hidden undercity of forgotten people, the abandoned people--people like Riddick that no one wanted, not even their mothers. This group is in danger.
Complications ensue...
Finally, Riddick agrees to help them because he realizes he’s found his tribe. His people. His family of choice.

With the sequel I thought I’d get Andrew Vachss in space with a little bit of Hollywood badass thrown-in. Instead, I got Conan in space with a whole lot of lazy and generic fantasy trappings.

I remember being confused at first--This is the sequel to Pitch Black, right?

Why is the only decent bit of dialogue, “Did you know you grind your teeth in your sleep... sexy.”?

And why is the rest awful fantasy dialogue that you'd expect from a Syfy Pictures Original:

“Consider this: if you fall here, now, you will never rise. But if you choose another way, the Necromonger way, you will die in due time, and rise again in the Underverse.”

“He's not a man. He's the Holy Half-Dead who has seen the Underverse and returned with powers you can't imagine.”

Did I miss something? Did we all watch the same movie?

These are the same guys doing this film, right? I mean, the people behind the first one. It's not the guys responsible for Highlander II: The Shitting The Quickening, is it?

Yeah, same guys. No, not the Highlander II guys.

Well, I remember telling myself, at least I have the first film.


The first film and my imagination.