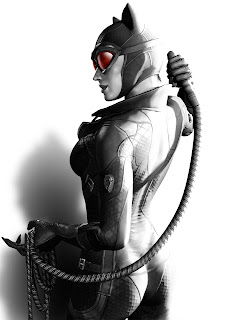 After playing the first game together, the wife and I were excited to play Batman: Arkham City. She was especially stoked for the sequel since Catwoman is a playable character. So as soon as we could, we pre-ordered it from Game Stop, and I picked it up on my way home from work the day it was released.
In a lot of ways, it’s almost a fantastic game.
Almost, even though it’s gorgeous. The city is beautifully rendered. You could easily spend hours just wandering around and looking at the environment. Sometimes to your detriment. You’ll find yourself getting lost a lot at the beginning of the story, until you learn the landmarks and how to maneuver around the crowded, gothic skyline.
Almost, even though Kevin Conroy returns as Batman and Mark Hamill reprises his role as Joker. Virtually every character from the Batman universe shows up at least once. All are well-acted. The voice-over work is excellent, easily up there as the best I’ve ever heard.
Almost, even though the plot is engaging. It takes off from the first game, but isn’t so tied together that you're lost if you've never played Arkham Asylum. There are a couple of big twists. One will come as no surprise and the other will probably throw you for a loop--“How the hell did I miss that clue?”
Almost, even though it plays well. With a little practice you’ll get the controls down. There are some nice VR training missions to help you fine-tune. Some of the levels are challenging. Occasionally, they're annoying, but not too bad even if I did consider throwing the controller against the wall twice.
No, it’s an almost game.

Almost, because of Catwoman.
Not her costume. I didn’t mind the cheesecake factor. Honestly, I would have been surprised if she wasn’t showing some cleavage. It’s not even her playability as a character. Except for the lack of equipment, she’s more fun than Batman. She’s quicker, more acrobatic, and not as a strong as the Caped Crusader—which means, once you get the combat down, she’s capable of these long chains of attacks that are both fun to do and fun to watch.
What disappoints me about Catwoman is the way’s she treated.
In case you don’t know the premise of the game, a section of Gotham has been walled off and turned into a prison a la Escape From New York and the No Man’s Land storyline for years ago. All prisoners from both Arkham Asylum and Blackgate are dumped into the new Arkham City and left pretty much to their own devices.
I think you can see where this is going.
Every thug and every villain calls her a bitch. Constantly. It’s bitch this and bitch that. When they’re not calling her bitch they’re insinuating that they’re going to rape her. When they’re not calling her a bitch and they’re not insinuating that they’re going to rape her, then they’re calling her a bitch while insinuating that they’re going to rape her.
I know, realism, right?
“But she’s a woman,” you say. “These are all men. They haven’t seen a woman in years. I think they even say that.”
Well, they do, but—
“She kicks their ass though,” you say. “That’s what they’re there for. To call her a bitch and then get kneed in the balls.”
Maybe, but I still call bullshit. If it’s realistic for them to react that way, how come no one insinuates they’re going to anally rape Batman? That does happen in prison, you know, and this is supposed to be realistic, right?
Also, why doesn’t anyone call Batman profane names? Huh? Where’s the asshole, dick, prick, bastard, or son of a bitch when you’re playing the Dark Knight and confronting a group of thugs?
It’s a shame. It really is because it makes everything that wouldn’t have bothered me feel glaringly sexist, further lessens my faith in DC to ever present a female character in a positive light and makes Arkham City an almost game.