- November 10, 2011
"The News of the Screen" column in the February 24, 1974, issue of The New York Times discusses Shane Stevens' involvement in the film adaptation of The Me Nobody Knows and reveals another doomed Hollywood project.

Gil Cates was scheduled to direct Stevens' screenplay of the socially conscious musical. Cates was the well-known director of films like I Never Sang For My Father and Summer Wishes, Winter Dreams. Now, he's probably best known as the producer of the Academy Awards shows, former Dean of the UCLA Film School, and the uncle of Phoebe Cates.

In the column, Cates talks briefly about Me and then mentions his next scheduled project — a film version of Way Uptown In Another World adapted by Shane.

Neither of the duo's projects went anywhere.

In early September, I e-mailed Cates at The Geffen Playhouse where he served as Producing Director. I introduced myself, explained my research and asked if he remembered anything about Shane Stevens. 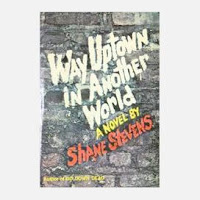 I received a response back on October 29. Cates apologized for the delay, said he remembered Stevens only dimly. The Me Nobody Knows and Way Uptown In Another World were "projects that just didn't happen." He wished me well and I thought that was that.

A couple of days later, Cates was dead.

He was a stranger to me, but it was still unsettling. He was a busy man who took the time to answer a question about Shane Stevens (a man he probably hadn’t thought about in 40 years) for a random guy in Indiana.

Now, he was dead.

The main enemy I face in constructing a portrait of Shane Stevens remainains the most ruthless — Time.