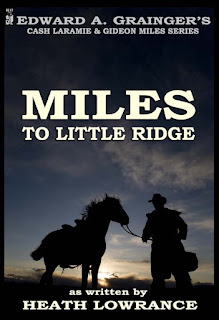 My exposure to Westerns was mainly limited to films and television until Edward A. Grainger. His stories changed my perceptions of what the genre had to offer.  Fueled by superb writing, the continuing adventures of Cash Laramie and Gideon Miles provide the same excitement of the films I’ve enjoyed while confronting all those big things about existence the literary types like to claim as theirs and theirs alone.

I was nervous when I heard other authors were going to be writing tales featuring Grainger’s two heroes. Would it feel...right? Could they pull it off? Would these new stories have the same mix of action and humanity?

With clear and direct prose, he tells the story of Gideon Miles’ arrival in the town of Little Ridge, Montana where the Marshal tracks down a fugitive who’s raising his daughter on his own following his wife’s death. Despite his claims of innocence, the wanted man is reluctant to leave his fate up to a jury and his daughter in someone else’s care. Miles’job is further complicated by a foe from his past, hellbent on getting revenge for the death of his friend in a robbery.

“Miles to Little Ridge” is a startling testament to Lowrance’s abilities as a writer. He’s captured everything you’ve come to expect from Grainger’s Westerns without resorting to pastiche. It’s well-paced and exciting without sacrificing any of the humanity as it confronts the tricky boundary between duty and justice.