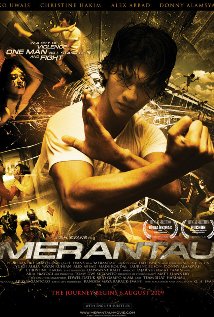 While waiting for the U.S. release of The Raid, I again streamed Gareth Evans and Iko Uwais’ first film,
Merantau. The movie takes its name from a traditional Mingangkabu rite of passage, a journey a young man undertakes to prove his worth before returning home and starting the next phase of adult life. If I understand it correctly, it’s not so much about going out and making money as it is gathering life experience and discovering your moral identity—what’s acceptable and what’s unacceptable, what’s right and what’s wrong, what’s good and what’s evil. It’s a theme that adds Merantau to the list of films I recommend to people when they dismiss “chop-socky flicks” as a mindless stream of fights.

Yuda (Iko Uwais) leaves his rural village for the city, hoping to open a school teaching Silat. Unfortunately, he discovers the address in Jakarta he had been given for a place to stay has been demolished, forcing him to spend his nights sleeping in a construction site and his days wandering the streets looking for work. When Adit (Yusuf Aulia) steals his wallet, Yuda has no choice but to chase him down and retrieve his last bit of cash. The pursuit inadvertently leads Yuda to the street kid’s sister,  Astri (Sisca Jessica), and puts the young Silat Master on a collision course with a pair of twisted European brothers, Ratger (Mads Koudal) and Luc (Laurent Buson), running a human trafficking ring.

Merantau is beautifully written and directed by Gareth Evans. A lot of care went into this film and it shows. The beginning and ending scenes of the Sumatran countryside are expansive, lush and colorful, while the cityscape of Jakarta is closed, sparse and drab. It’s full of haunting images and visually interesting shots, but thankfully, for martial arts fans, unlike a lot of western directors—who are fixated on ruining fight scenes with medium shots, close-ups, and constant camera cuts—Evans knows how to shoot unarmed combat. He understands the importance of proper distance and the dynamic appeal of the long take to showcase what’s actually going on.

Iko Uwais is great martial artist and I think poised to become an international action star (especially once wider audiences get a chance to see The Raid). He’s fresh faced and likeable with an easy screen presence. The very cute Sisca Jessica pulls off the rough innocent/streetwise combo very well. And I’m always pleased to see Laurent Buson (sometimes billed as “Lohan”—as is the Shaolin Kung Fu term, not Lindsay’s last name).

Merantau is a film obviously made by a group of people who like and care about martial arts films. That’s probably its greatest strength and its biggest problem. Regretably, I don’t think it ever fully manages to step out of the fearsome shadow of Tony Jaa’s Ong Bak. The fight scenes don’t really find their stride until the confrontation on the footbridge. Once the movie hits that point, we’re golden. The confrontation in the elevator is exciting and dramatic and manages to hit those same heart-wrenching, dramatic moments of violence I loved in John Woo’s The Killer. The showdown on the docks is one of the best I’ve ever seen from the one man versus the horde to the final two on one fight against the villainous brothers.

Even with the gorgeous cinematography and tight script, the problem is, from a martial arts standpoint, a large portion of the beginning feels like Ong Bak—without the jaw-dropping gymnastics and parkour. I think the Jackie Chanisms fall a little flat too and probably should have been avoided all together. Instead, I would have liked to have seen more interesting fight choreography from the very beginning and more of an emphasis on what makes Silat—a martial art most Americans have never seen—different.

Nevertheless, it’s a great film and easily makes my list of favorites. If I’m correct, I think all the mistakes of Merantau will be corrected with The Raid and we’ll see an explosion of quality martial arts films from Indonesia.