The Hunter From The Woods 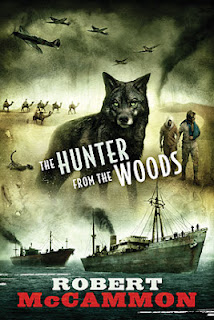 I just pre-ordered the trade edition of Robert McCammon's The Hunter From The Woods from Subterranean Press. I would have preferred one of the nicer, signed editions that were previously released, but they were a little out of my price range.

I've been a fan of McCammon for a long time. Mystery Walk is one of my all-time favorite horror novels. I always believed Swan Song was a much more successful, and ultimately fulfilling, novel than Stephen King's The Stand. And Boy's Life is one of the most magical and wonderful books I've ever read. Period.

Then there's The Wolf's Hour. Nowadays the idea of a werewolf James Bond fighting Nazis may not seem all that original, but I vividly remember discovering McCammon's book when I was a kid and being blown away by the horror-romance/spy-action-adventure/thriller hybrid. The return of Michael Gallatin looks to be just as exciting:


"The Hunter from the Woods marks the much-anticipated return of Michael Gallatin, the lycanthropic hero of Robert McCammon's 1989 classic, The Wolf's Hour. These all-new, interlinked stories offer a full measure of McCammon's trademark narrative excitement, and comprise a fascinating composite portrait of a unique fictional creation.

The volume opens with a pair of brief glimpses into Michael's early life in Russia and his initial recruitment into the British Secret Service. It ends with a haunting vision of the werewolf at twilight. In between, McCammon gives us three stellar novellas depicting different phases of Michael's long, brutal war against Nazi Germany. 'Sea Chase' is a nautical tale about the hazards of transporting a defecting German scientist to a place of sanctuary in England. 'The Wolf and the Eagle' is the account of an unlikely friendship between rival 'men of action' and a harrowing portrayal of a lethal forced march through the North African desert. 'The Room at the Bottom of the Stairs' tells of an impossible, ultimately tragic love affair set in the embattled city of Berlin during the latter stages of the war.