Lately the wife and I have been revisiting a lot of movies we haven’t seen in a while that we both remember liking. Some we own and hadn’t taken off the shelf in years, and others just ended up in the Netflix instant queue as soon as they popped up in the onscreen menus.

It’s been a hit and miss experience. I expected some of it, but a few films have surprised me. 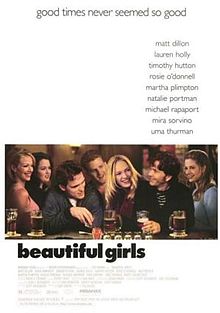 In Ted Demme’s ensemble dramedy Beautiful Girls, Timothy Hutton returns to his small town for his high school reunion. He hangs out with his old buddies and they confront the "crossroads" of their thirties. Back in 1996, I thought it was funny, dramatic, and full of important life lessons. Watching it now—not so much. It’s plotless—random scene, random scene, cue trite and preachy philosophizing, and then repeat. There are too many characters to emotionally invest in any of them. Timothy Hutton’s fixation on the young Natalie Portman now that I’m in my thirties and not just a couple of years older than her is creepy and sad. Michael Rapport’s character is just pathetic. I found Matt Dillon’s hockey jock a little loathsome, his “redemption” weak, and Mira Sorvino should have left his ass and never looked back.

The experience has left me wondering, what changed? I saw Beautiful Girls at the theatre and watched the shit out of it when it landed on the campus movie channel. So, is it me? Was the film always bad and I’m only now seeing its flaws? Or does it come down to being able to identify with the characters? I’m not nineteen anymore. I’m in my thirties, have worked through my crossroads, and am in a different place than anyone in that film.

I do think relatability is a part of it. I recently watched Good WillHunting again and found myself still able to identify with the characters, only different ones—Robin Williams appeals to me now much more than Matt Damon. But if it’s just that, then why couldn’t I watch Beautiful Girls and appreciate it from the standpoint of nostalgia? You know, "Ah, the crossroads of life, I remember that time." I mean, John Hughes still works for me and I haven’t been a teenager in almost two decades.

Truthfully, I think it does come down to Beautiful Girls being a poor film—again, I can't get over the message the Matt Dillon/Mira Sorvino plot sends: Ladies, your man my make you feel like complete shit, shred your self-esteem, impact your body image, and fuck a married woman, but stick around 'cuz things'll work out. But there's still that lingering question in my mind. How do you create something that resonates at 19 and 36?