A Secret Passion For Mercy

“There are certain families whose members should all live in different towns— different states, if possible—and write each other letters once a year.”
The Blue Hammer, Ross MacDonald

Yesterday on the way home from yet another doctor’s appointment for the lovely wife, WTTS played Warren Zevon’s “Poor Poor Pitiful Me.” For a moment, it hit me kind of hard because it’s one of those songs and lately, in the midst of so much turmoil, I’ve been terrible at being present—my thoughts sometimes get away from me to twist and turn down strange and emotional paths.

But it was only for a moment. After that moment, I felt a lot better.

Because Zevon's song led my thoughts to Ross MacDonald.

“The Archer novels are about various kinds of brokenness.” —Ross MacDonald

When the series began with The Moving Target in 1949, Lew Archer is a typical hardboiled hero investigating the usual hardboiled crimes that involve money and blackmail, then lead to the usual murder, another one after that, and probably, at least, one more for good measure. Though that’s not to say the early books are bad books. They’re not. There’s a reason Anthony Boucher called The Way Some People Die, the third book in the series, “The best novel in the tough tradition I've read since Farewell, My Lovely and possibly since The Maltese Falcon.”

But they’re not as good as the later books. MacDonald doesn’t find his voice until The Doomsters. And he doesn't understand it or his character until his next book, The Galton Case:

“Almost twenty years have passed since Anthony Galton disappeared, along with a suspiciously streetwise bride and several thousand dollars of his family's fortune. Now Anthony's mother wants him back and has hired Lew Archer to find him. What turns up is a headless skeleton, a boy who claims to be Galton's son, and a con game whose stakes are so high that someone is still willing to kill for them.”

With the 8th book in the series and the ten more that would follow, MacDonald sits aside a lot of the hard-boiled junk and focuses on themes of identity, family secrets, childhood trauma, and relationships between men and women. Archer goes from your standard tough guy to a world-weary, surrogate father who races against time —does the man ever sleep—to save a whole host of desperate young people from their parents' sins.

I don't know.  As a writer, it's sometimes hard to trust in yourself, even if you've got a number of bestsellers under your belt. Growing up, Kenneth Millar [MacDonald's real name] had a very difficult childhood. In 1956, his daughter Linda Millar, a trouble teenager herself, killed a boy in a hit-and-run. Maybe it took all those things coming together—the trusting in his skills, confronting his own troubled past and his daughter's troubled future—to begin crafting what's been called “The finest series of crime novels ever written by an American.”

“I used to think the world was divided into good people and bad people, that you could pin responsibility for evil on certain definite people and punish the guilty. I’m still going through the motions.”The Moving Target, Ross MacDonald

So what does this have to do with Warren Zevon? 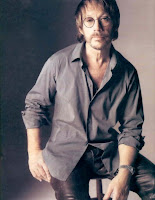 Paul Nelson, a friend of Warren’s and the man who wrote “The Crack-up and Resurrection of Warren Zevon” for Rolling Stone magazine in 1981, was the first person to relate the story of Ross MacDonald’s intervention.

In brief: Zevon was a big Lew Archer fan. Nelson knew MacDonald from an interview he had done. Nelson called MacDonald. MacDonald showed up at Zevon’s house, and the two talked for several hours. “And I found myself telling him things that I'd never told anybody,” Zevon said later, remembering the day. “...Ken Millar made me realize that I wrote my songs despite the fact that I was a drunk, not because of it.”

The next day, following their conversation, Zevon re-entered his detox program.

"You have a secret passion for justice. Why don't you admit it?"

"I have a secret passion for mercy. But justice is what keeps happening to people."