Don't Make Fun of Him, Be Appalled 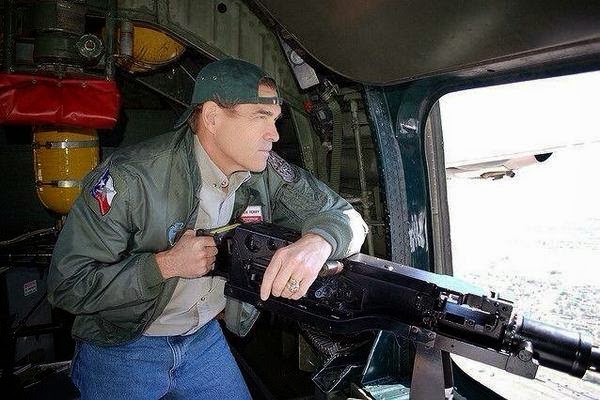 So many things annoy the hell out of me about Gov. Perry and his bullshit photo ops with machine guns at the border.

First, let's be honest, the Border Crisis he keeps talking about is in reference to children. He’s got the National Guard staked out at the border to stop children from crossing. Yes, I know he’s given some bullshit about how all these resources being diverted to dealing with the children are allowing some Invasion U.S.A. style influx of criminal aliens, but it’s just that--bullshit. He's hoping if he repeats it often enough, you'll forget this is all really about kids and just remember him saving us from evil foreigners like this is the mid-80s and he's Chuck Norris. It’s all a shell game to portray what should be a no-brainer bipartisan response to a humanitarian crisis as the lax liberal policies of the Obama Administration contributing to the disintegration of this country. Just like the pictures of him with military weapons at the border, it’s bullshit PR for his 2016 Presidential run we all know we’re going to have to suffer through.

And let’s talk about the children at the border who've endured a hell you cannot even fathom to make it this far. The bulk of them are from Honduras, El Salvador, and Guatemala.  Honduras has the world’s highest homicide rate, El Salvador isn’t far behind, and all three countries are incredibly impoverished with "30% of Hondurans, 17% of Salvadorans, and 26 % of Guatemalans living on less than $2 a day."

You spent more at Starbucks this morning.

What else do those countries have in common? Every single one is a victim of America’s terrible foreign policy. Just take a look at the WikiLeaks documents about US support for the 2009 coup in Honduras. Or spend five minutes reading about The Salvadoran Civil War. Or maybe the US backed 1954 Guatemalan Coup that sparked the Guatemalan Civil War.

This is what he's capitalizing on. Poor children from Central American countries who've sufffered a great many terrible things due to our meddling. Don’t make fun of Rick Perry, be goddamned appalled. Seriously. Be appalled.