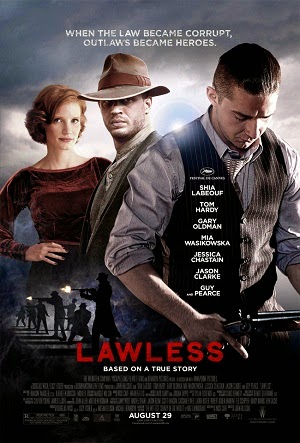 Netflix finally added Lawless to their streaming service. I had wanted to see this crime drama back in 2012 when it was released, but there’s very little that will actually get me out to the theatre. Seeing a film on the big screen is too expensive. For the price of a single ticket I can pay for an entire month’s worth of Netflix with money left over. Not to mention, I can’t remember a time in recent memory when I did risk the multiplex that wasn’t ruined by audience members who couldn’t seem to understand that seeing a film is a shared experience between a group of strangers who don’t want to hear their commentary, incessant coughing, or help them chase their kid down.

After seeing it on the small screen, I’m glad I waited for Netflix.

Lawless has a lot going for it. Even with Shia, whom I’ve never ever cared for-- going all the way back to Holes, the cast is top-notch. Tom Hardy, Jessica Chastain, Gary Oldman, and Guy Pearce all deliver with what's given. Australian director John Hillcoat shot a beautiful film. And Nick Cave’s screenplay comes by way of Matt Bondurant’s historical novel The Wettest County In The World.  Not to mention, I’m just a sucker for moonshine films. I come for a long line of ridge runners and seeing Thunder Road on television as a child is probably half the reason I put together Hoods, Hot Rods, and Hellcats.

But Lawless falls short of all my expectations by a country mile. The film is an unsatisfying mash of art house and violence. The terrible pacing is made all the more awful by an unnecessary prologue and epilogue, only the intense violence breaks the monotony and even that is ultimately unsatisfying since we’re given not much of anything that we haven’t seen before in some other gangster film. Worst of all, there’s more than a good deal of mumbling, usually to deliver that sort of down home philosophizing that’s only written by men who either aren’t from the country or make their living trying to sell you on some rural myth.


Mostly, Lawless is a pretty film that reminds you how much money you save with Netflix.