Baphomet Rising, Part I: The Dark God of The Templars


I wrote a non-fiction piece to submit to a specific market that ended up falling through. Instead of tossing the piece, I figured I'll break it up and post it here.

"And I believe in the Serpent and the Lion, Mystery of Mystery, in His name BAPHOMET."
—Aleister Crowley, The Gnostic Mass 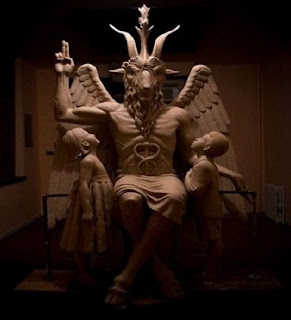 In 2012, a private group funded the installation of a Ten Commandments monument at the Oklahoma state capitol. This clear and bold violation of the First Amendment of the Constitution received its first real challenge in the media from The Satanic Temple. If one religion is allowed to have a monument, they reasoned, then all religions are allowed.

Through the crowdfunding site Indiegogo, The Satanic Temple then raised $28, 180 to construct theirs: a nearly 9-ft tall statue of Baphomet sitting on a slab, flanked by two children eager to hear his words.
But who or what is Baphomet?  And what does this mean?


The Dark God of the Templars

Baphomet begins with The Knights Templar. Unfortunately, once you examine the actual history of the order, it’s not nearly as fun as The Da Vinci Code makes out. It comes down to what people still fight over—money.

Founded around 1119, during the First Crusade, the Templars were originally composed of a mere nine members. Their mission was to protect pilgrims on their way to the Holy Land. In 1128, Pope Honorius II granted them the church’s official sanction—declaring them an army of God.

And making them the single, largest charity throughout all of Europe.

During the next two hundred years of the order’s existence, the Templars gathered considerable power and began several lucrative practices that would lead to modern banking. New members was required to take a vow of poverty so all their lands and money were signed over to the order. Nobles heading off to the Crusades knew they would be away for many years. To protect their wealth and holdings, they temporarily signed control of everything over to the Templars.

Now the biggest danger for pilgrims en route to the Holy Land was never Muslims or agents of the supernatural out to kill Christians. It wasn’t djinn or demons pilgrims needed to watch out for, it was bandits. From this arose the Templars’ most lucrative money-making scheme: a pilgrim makes an initial deposit at a Templar stronghold; then, whenever they need money on their journey, all they have to do is stop at the nearest stronghold and make a withdrawal—minus fees.


By the time Pope Clement V bowed to pressure from King Philip IV of France to take down the order in 1307, the Templars had considerable power, vast holdings, immense wealth, and held promissory notes from Europe’s elite. It should surprise only the naïve that King Philip himself also owed the Templars a ridiculous sum. 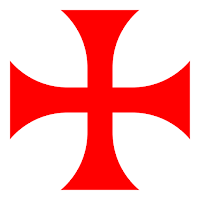 Most of the accusations leveled against the Templars were the very same ones that had been used earlier against the Cathar heresy when the Church wiped out the renegade religious sect: worshipping the Devil in the form of a cat, worshipping an idol, renouncing Christ and spitting on the crucifix, and engaging in homosexuality. There were probably a few things that were true to an extent, but nothing like the medieval claptrap that went hand in hand with heresy accusations. Undoubtedly some of the knights were homosexuals. However, if any of them participated in a ceremony to renounce Christ and spit on the cross, modern thought is that it was a type of special training in case of capture—how to renounce your faith in deed but not in heart while under duress.

The only unique allegation against the Templars was that they worshipped Baphomet. Sometimes described as a severed head and other times as an idol, it was entirely a fabrication and doesn’t even appear in the initial charges against the Templars. Most of the members put to question had never heard of Baphomet. The ones who mentioned it in their torture-induced confessions offered either wildly different accounts or were clearly repeating what their questioner wanted to hear.

But the Templars did not worship the Devil. There has never been proven to be any organized or wide-spread case of “devil worship” ever. I repeat—ever.

Baphomet is believed to be a corruption of Mahomet, old French for Mohammad. The earliest known reference to the name comes from another crusader, Anselm of Ribemont. In 1089, he wrote: “As the next day dawned, they called loudly upon Baphometh; and we prayed silently in our hearts to God, then we attacked and forced all of them outside the city walls.”


None of this has stopped the flights of fancy that color occult scholarship from offering up a host of possibilities. The wackiest involve complex equations and ancient ciphers in other languages. Probably the sanest supposition is based on the name sort of looking like two Greek words, “baphe” and “metis,” which translate to “baptism of fire.” Unfortunately, this is suggested to support the idea that the Templars were a secret cult of Gnostics holding the keys to some ancient wisdom.

Truthfully, the Baphomet charges accomplished two things. To the superstitious mind believing in the raging engines of hell staffed by an active and vast infernal hierarchy laboring for the downfall of man, Baphomet was merely another name added to the long diabolical roll call. But also, subtly, it was used to suggest the Templars had switched sides. The holy order entrusted to protect loyal subjects of Christendom on their journey to the Holy Land, were, in fact, secret Muslims.

The combined might of a king and a pope finally brought an end to the Templar order. Their leaders were executed, their holdings and wealth divided amongst the Catholic Church and the kings of France and England. The Templars quickly became the favorite target of conspiracy buffs and the all-time biggest magnet for pseudohistory and occult bullshit as writers attempted to connect them to virtually anything imaginable, from simple slander against Freemasons to fanciful silliness like a secret bloodline of Christ.

Assuming you’re not peddling your own secret knowledge, writing about the occult can be difficult. Clarity and honesty and objectivity tend to be three things given short shrift. Real logic is often absent from discussion. As occult historian Richard Cavendish explains in his book The Black Arts, “Magical thinking is not random, it has its own laws and its own logic, but it is poetic rather than rational. It leaps to conclusions which are usually scientifically unwarranted, but which often seem poetically right.” Or to put it another way, coincidence is causation, and correspondence and association is key for a conclusion. Human beings are, by nature, pattern-finding animals—regardless of whether a pattern is actually there or not. Nowhere is this more smack-you-in-the-face evident than when it comes to the history of magic. Practitioners and aficionados of the “occult” regularly made things up or simply stole someone else’s work and repackaged it.


Basically, it’s a lot like being on the internet.


But why does it matter? Well, I'll get to that.