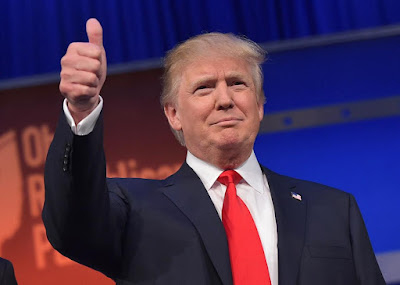 Let’s talk about Donald Trump for a bit, okay? I keep reading articles about the GOP being paralyzed by his ever-growing lead in the primaries. Even as the DNC continues their own shell game to foist their corporate-sponsored candidate on us, they are also busy wringing their hands and hoping someone on the other side derails Trump.

So why is he winning?

Besides the fact that America actually really loves a bully, first thing is first. If anyone is responsible for Donald Trump’s commanding lead, it is the Republican Party. However you may feel about them, I think everyone sane would agree that they’ve willingly allowed themselves to be hijacked by a gang of crazy con artists who pander to extremists and nut-jobbers—as clearly evidenced by the other candidates in the field. But moreso even than that, Trump is the monster conjured after decades of the Republicans repeating their two favorite mantras: rich people are great and anything to do with government is bad.

Which brings us to the feather in Trump's cap…the media loves him. Absolutely fucking loves him. I’ve seen more articles about Trump than I have for any other candidate. Hell, I’ve probably seen more articles about Trump than I’ve seen articles written about anything else. And  can't even count how many people decry his candidacy yet spend most of their time online sharing articles about him. Trump is simply an endless source of clickbait for normally “legitimate” news sites. What this has done, however, is provide the richest candidate in the race with a ton of free media, saving him from having to pony up any of his own cash.

Here’s the other thing. And before I say it, I want to make something clear. I’m not a Trump supporter. I do not want to see him as president; the very last thing I think this country needs is a businessman in the White House who runs the country in a manner that benefits the already wealthy—that’s been our problem for waaaaay too long and that's why we're in the position we're in with most of us living paycheck-to-paycheck and afraid to ever get sick because we know we'd go broke. So…

Trump is smarter than you give him credit for.

Pretending he’s not smart and doesn’t know what he’s doing really doesn’t help anything. Honestly, he hasn't said much that is more egregious than anything any other Republican candidate has said. The only difference is what he says getting reported more and repeated endlessly. So trying to present him as merely some buffoon who lucked into wealth and rattles off a bunch of gobbledygook nonsense that only appeals to a bunch of ignorant racists accomplishes nothing other than adding fueled to his ever growing fire: it keeps the click-bait machine rolling, which gives him more free media without costing him a dime; it adds to the discontent he’s managed to use in his favor, “See they think you’re dumb and ignorant. I’ve got your back and together we’re gonna make America great again.” Because really that’s what this primary is about across the board.

The fact is that Donald Trump has had more business successes than failures. If you really look at his bankruptcy filings those were more about him knowing how to game the laws in his favor than anything being a “failure” or him being “incompetent.” It’s exactly the same as the wealthy people who makes 20 times what you do but avoid paying any taxes. The Trump we’re seeing in the news and on the campaign trail is the brand he crafted when he decided to become a TV personality. And it’s strategic. Very strategic. The man wrote a best-selling book on negotiating, for Christ’s sakes. Look, Scott Adams, the creator of Dilbert, has covered the “real” Trump in his blog in great detail. If you’ve not read it, go read it and you’ll understand why Trump does what he does.

And to me, it’s the real Trump who’s scary. The crafty businessman who knows what he’s doing. Not the ridiculous caricature with the dumb hair and the orange skin.